Mastering the Ins & Outs of How to Use Tek ScrewsMaryLouise Eckman

How to Use Tek Screws 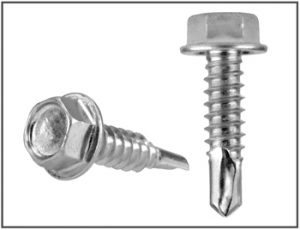 Tek screws are among the most popular screw types, and for a very good reason — they are a broad category that includes many different self-drilling screws. Tek screws are commonly used in the electrical industry and other service jobs where there’s a need to attach metal to metal or wood to wood. Tek screws are especially helpful when you are fastening in volume. Naturally, the self-drilling nature of Tek screws makes the work go much faster.

If you’re considering Tek screws for an upcoming job, here’s a look at what they are, how to use them, as well as the different types of Tek screws you can find.

What Are Tek Screws?

Tek screws are incredibly common due to their self-drilling or self-tapping nature. Whether you’re a service contractor or a do-it-yourself enthusiast, time is precious — and Tek screws help you save time.

Each Tek screw features a carving piece on its tip, which is what makes self-drilling possible. This means you don’t need to create a pilot hole before the fastener, and it also means your work moves forward efficiently.

Plus, Tek screws are versatile. While they are often used in the electrical industry, you can apply them to almost any project where a Tek screw’s self-drilling ability will be helpful.

The Ins and Outs of Using Tek Screws

The best way to use a Tek screw is with an electric screwdriver or drill. You can choose to create a pilot hole, which will ensure your Tek screw goes in straight. Just make sure your pilot hole is slightly smaller than the Tek screw, or else the screw’s grooves won’t be able to catch.

Many choose not to drill pilot holes, though, as one of the significant benefits of using Tek screws is that you don’t need to. Still, drive Tek screws as slowly as possible, which will help them drive straight even without a pilot hole. Tighten the screw, but make sure it’s not too tight. Tightening too much can lead to the head stripping, which will make it difficult to remove the Tek screw if necessary.

You’ll find a wide range of diverse types of Tek screws. Your application is unique, which is why you need to find a Tek screw that’s well-suited for the job. Some of your options will include:

This is just a sampling of the many types of Tek screws available on the market. Once you understand the job at hand, you’ll be able to identify the perfect Tek screw for completing the task effectively and efficiently.

Get the Tek Screws You Need at All Points Fasteners

Are you wondering: What is the use of a Tek screw? When using Tek screws, you enjoy speed, efficiency and stability that isn’t always available with other types of screws. Now that you know how to use Tek screws, it’s time to find the perfect products.

At All Points Fasteners, we carry a massive selection of fastening solutions — Tek screws included. When you choose All Points as your fastener supplier, you can always count on competitive pricing, high-quality products and industry-leading customer service and support.

Find the Tek screws you need for your next job today. Contact us if you have any questions.